The Poitou-Charentes area of western France is not a historic region of France, but was formed in 1956 from the major part of the old Poitou area, plus three smaller areas in the south. It is now part of the large region of southwest France.
The climate of the Charentes is one of the mildest in France, and the coastal area of this region is the sunniest part of France outside the Mediterranean coastal areas.
In brief, the region covers the central part of France’s Atlantic coastal plain, together with a gently undulating hilly area further inland, the first foothills of the Massif Central. In the southern part of the region, extensive vineyards provide the grapes that are used in the production of Cognac and the famous local apéritif wine Pineau des Charentes.
In the north of the region, the departments of Deux Sèvres (79) and Vienne (86) make up the historic Poitou region, centered on the ancient city of Poitiers; the low-lying departments of Charente (16) and Charente- Maritime (17) make up the southern part of the region.

The whole region is largely rural, and even the regional capital Poitiers has less than 100,000 inhabitants. Niort, capital of the Deux Sèvres department, is specialised in financial services, notably insurance, and mail-order, which is surprising for a town of just 60,000 inhabitants; however the town was hit hard in 2008 by the collapse of the CAMIF, one of France’s big mail order cooperatives, and by the financial crisis in general.
The regional council has tried hard to develop the regional economy; the creation of the Futuroscope theme park, just north of Poitiers, opened in 1986, was designed to give an economic boost to the region; but though it has generally been a successful tourist venture, and is one of the twenty most visited attractions in France with an average of over 1.5 million visitors a year, it has not transformed Poitiers into one of France’s major cities, and many of those who visit the Futuroscope, located beside the A10 motorway, are just passing through on their way to the coast, or further south.

The coastal area, including the towns of La Rochelle, Rochefort and Royan, is popular for seaside tourism and also with yachtsmen; however many kilometres of the coastline are given over to oyster beds, oysters being one of the big local specialities.

The coastal islands of Oléron and Ile de Ré are famous for their beaches and maritime environment. Some parts of the coastal area lie at or even marginally below sea-level; in Spring 2010, high tides and heavy seas pushed by hurricane Xyntia broke through the sea defences causing serious flooding. As a result of this, some 1500 houses in the Charente Maritime and Vendée departments are to be demolished. 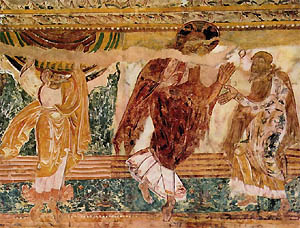 Romanesque sculpture on a Saintonge church The old citadel at Brouage Villa La Rogaia (Umbria, Italy) : “many of our guests return to La Rogaia, some of them for many years”